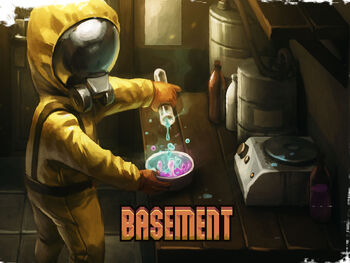 Basement is a drug-dealing strategy/simulation game. You play as a great scientist that has been forced to do not exactly legal stuff underground, as nobody wants to support his idea. Basement is all about management. You build your own enterprise producing several types of Drugs. Find the right place, build production rooms, hire Workers and Security staff, avoid Federals and raise the most effective company.

Our scientist starts small in a tiny basement, selling small packs directly to a queue of buyers. Since Police have no interest in small-time dealers, he has some room to grow. Once expansion begins, you will use a map to direct trucks. This will allow you to sell higher quantities. But be careful! You will encounter fights if you get busted by cops or gangs. After you acquire more Territories, Quests, and attention, your enterprise starts to become fragile. If your enterprise survives all hardships, you will take an end-game/final path. Otherwise, you will begin losing Money and workers while your basement becomes sabotaged, with you finally being imprisoned. From there, we are still brainstorming - we can either make a jail quest to escape (text quest) and allow you to start again with some money saved from your previous basement, or just end the game.